The Next Boat has come a long way since the last writing. There has been test launching, and work on both motor and mast raising systems.

GREAT AUK has gone into the water once so far, for the purpose of testing the rudder and electric outboard. The leeboards – which are simple plywood prototypes – were also tested, though not under sail. Still, with that flat bottom in a crosswind the boards made a huge difference with holding course. The boat tracks pretty well, with or without the boards down, but in a crosswind putting them down makes a major difference in leeway even under power. That big cabin is quite a sail in its own right.

We positioned the motor off to the side quite a bit, in order to avoid unhappy clashes between propeller and rudder.

This arrangement is not ideal for steering, requiring turning the rudder a good bit in order to steer straight, or turning the motor quite a bit to compensate for that side position; either approach wastes a lot of power. The possibility of a second motor to be mounted on the other side of the stern, to balance everything out, is under serious consideration. It has been pointed out to me – thank you Tim – that a second motor would also really improve control for getting in and out of docks, given all the windage on this boat. A decision will be made before the big 10% spring sale at Defender Marine (nope, not receiving anything for that mention).

Those studying the above photo carefully might also notice that the motor really is not deep enough in the water. The bracket has since been moved down.

One of the other interesting motor issues, discovered in that big test, has been the enormous strength of the springs in the motor bracket. This bracket was chosen because it has the greatest range of travel, moving the motor up and down by about 15 inches, to get the motor out of the water when it’s not in use, and deep enough down when it is. But the bracket is designed for enormous heavy gasoline outboards that can weigh as much as 150 pounds. With a 40 pound Torqeedo on that bracket, pushing the motor down against the springs and into its operating position required two strong boatyard guys, and even for them it was awkward and difficult.

After a good bit of puzzling by everybody, my friend Tim suggested removing the springs entirely, which seemed ideal; this just left the question of how to remove them – not always a simple proposition, with heavy springs under tension. Christopher, who runs the boatyard, came up with the idea of carefully and evenly grinding the coils of each spring, side to side, until it became thin enough to completely relax. This worked well, without drama. There were two springs, and the second one was ground and removed in the same way. Now the bracket can be operated with a handy billy, a small block and tackle fastened to the back of the cabin top overhang, for lifting the motor and bracket into its upper storage position and for letting it down.

I do want to emphasize, in case anybody thinks about trying this themselves, that strong springs can be extremely hazardous. Wear a face shield! And I’m not recommending this at all… Just saying what we did. This was a “torsion spring” – the approach may be completely inappropriate for springs that work in other directions.

Meanwhile, since that first water test the mast has been installed on the tabernacle, along with a worm gear winch for raising and lowering.

I’m quite happy about this arrangement. It’s incredibly easy to put the mast up and down, which means that going under low bridges will be very straightforward. That will come in handy, in protected coastal waters for which the boat is designed. Canals have also been mentioned…

The mast winch has a gear ratio of 30:1, which is more than needed, but appeared to be the only option for a winch using a worm gear rather than ratchets (ratcheting winches are the kind generally seen on boat trailers). The worm gear is especially appealing for good control when lowering the mast. You have to crank it down, as well as up, but this also means that the mast will not fall, and it will not spin the winch handle if somebody lets go – there is so much friction in a worm gear, that it holds itself in place whenever the handle is not being turned. Previous dramas with boat trailer winches and wildly freewheeling handles, especially when launching, were high in mind when putting this together. Again thanks to Christopher, in this design process. That worm gear was a brilliant suggestion.

Best of all, this winch can also be turned with a cordless drill. This comes in handy, because the downside of a 30:1 gear ratio is the zillion number of times the crank must be turned in order to carry out the operation. Here’s the link for the winch that we got:
https://www.etrailer.com/Trailer_Winch/Dutton%7ELainson/DL10950.html
and the attachment so you can use a cordless drill:
https://www.etrailer.com/Accessories_and_Parts/Dutton%7ELainson/DL406102.html

And here’s the link for the slightly more expensive winch version that has the hex shaft already built in. We got another one of these winches for moving things at home, after seeing how well the one for the mast worked. If I were doing it over, the second one with the built in hex shaft is what I would put on the boat too. The biggest advantage of this second one is that the crank comes off easily when you are not using it, along with the low fuss connection for using a drill to turn it.
https://www.etrailer.com/Trailer_Winch/Dutton%7ELainson/DL11011.html

Neither of these winches is technically a saltwater piece of equipment. But they are powder coated, and expected to be used outdoors. It’s an experiment, seeing how this will hold up. Healthy doses of lanolin spray lubricant are part of the plan.

Turning these winches with a drill also involves having a “socket adapter” that makes it possible to attach a regular ratchet wrench socket to the drill. It’s a simple gadget – and surprisingly hard to replicate with stuff around the house. Here’s an example: https://www.harborfreight.com/hex-drill-socket-driver-set-3-pc-68513.html They are widely available, once you know what you’re looking for.

Just to be clear, I’m not receiving anything from anybody for sharing the links above – they are included for readers’ convenience, in case anybody wants to find this stuff, or would just like to see more pictures to illustrate the discussion.

The mast swings up and down on a 1/2 inch stainless pin that goes crossways through the tabernacle. We ended up needing to put the hole for that pin a little close to the forward edge of the tabernacle, so a couple of bronze straps have been added, in hopes of preventing catastrophe in case of a hard knock. Once the mast is up, a lower retaining pin holds it in place. The mast is raked forward, as is typical for a junk rig.

So that’s where we are now. The cabin was getting a berth, a couple of days ago:

Photos of the entire construction process can be seen on this smugmug photo page, which is periodically updated (click on the photo below to open the smugmug page – for some reason the link is not shown as text): 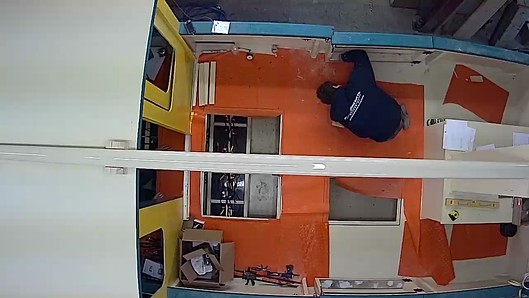 There are captions below those smugmug photos, if you look down a little extra, for anybody who wants more information about them.

The sail is being borrowed from AUKLET, but rigging won’t happen until the spring when the boat goes into the water in Joy Bay. The boat will be spending the winter at the boatyard. This will allow for some more work to take place over there, and will keep it safe from falling trees that could be an issue in the place where we could park it here at home.

Thanks to Bill Whalen for this post getting done… “Blog you must.” ;-)