When anchoring, it’s important to know how much line, or chain, or combination of the two that you have out. The overall combination is called the “rode,” whatever you use. There are calculations for determining how much rode you should let out, based on the depth of the water, the height of the tide, and the height of the boat’s bow off the water; the term for that ratio is “scope.” I’m not going to go into that calculation here, but for those who would like a reference here is one, and many more can be found with a quick round of Internet searching. There is a little more about scope added on at the end of this post.
https://www.boatus.com/expert-advice/expert-advice-archive/2019/january/how-to-calculate-anchor-scope

Once you know how much rode you ought to have out, there is the question of how your rode is marked, so you’ll know how much you have sent overboard.

There are colored plastic marking tapes sold at marine stores, which go into three strand anchor line quite well. But you can’t read them in the dark. They also don’t attach well to chain, and putting them into “8 plait” anchor line (one of the tradenames is Brait – nope, not receiving anything for that) does not seem friendly to the line, with possibilities for chafe. That’s the last thing you want to worry about, chafe at regular intervals in your anchor line. I switched over to 8 plait a few years ago because it doesn’t kink, as well as that it takes up a lot less space in its locker than three strand. I’m very happy with it, but the marking question became an issue, which led to the approach described here.

The old-time traditional way of marking anchor line involves different types and colors of fabric, and leather, in a specific sequence, which seems much too complicated, and also not good in the dark. So far as I know, nobody else besides me is doing the version described here, but maybe it will be helpful for those who are interested. I’d like to thank Dave Zeiger of Triloboats.com for his post about his approach to lead line marking, which inspired my thinking for the arrangement I settled on. Dave’s version, for his and Anke’s lead line in the deep waters of coastal Southeast Alaska, is found here: https://triloboats.blogspot.com/2012/03/our-lead-line-plumbing-depths.html

My version uses small knots and big knots: small ones represent 30 feet or 5 fathoms, and big ones stand for 90 feet or 15 fathoms. My charts all use feet, here on the New England coast, so that’s the unit I’ve learned to think in, and that’s what I’ll refer to from here on out. (Those who think in fathoms could easily switch it over.) A string is tied into the line every 30 feet, with knots in the string that correspond to the length of the line from the anchor.

I ordinarily use 60 feet of chain for the first part of the rode, so the chain is marked at 30 feet with colorful wire ties on a number of links, to make them easy to notice on the way by. Sixty feet is marked by the transition between chain and line, and then the strings start at 90 feet; all of these can be seen in the photo at the top of this post.

The kind of string that has worked well for this is tarred nylon seine twine, which I discovered thanks to the the author of The Complete Rigger’s Apprentice, Brion Toss, who talks about using it in many ways. Thanks to the Internet I was able to find it years ago, and now I use it in many ways also. It is sturdy, comes in multiple thicknesses, does not rot, and holds a knot without slipping. I’ve used it for lashing in many places on the various boats, where the seine twine is still going strong after years in the weather and many miles of use. (Not receiving anything for posting this link – it’s just here for readers’ convenience)
https://www.memphisnet.net/product/2192/twine-tarred-seine

Here’s what the markers look like, tied and ready to be added to the line:

On three strand line, I think it’s worth looping the marker around one strand of the anchor line, and back through itself, and then weaving it over and then under the next two strands, so it is well-fastened. On 8 plait, I loop it around one pair of strands and back through itself, and then work it over and under a couple more times. With this weaving in mind, when you tie the markers it’s good to leave enough length for those extra tucks. It’s important to tuck the knot that forms the big loop, to avoid confusion.

The funny thing about this arrangement is that 90 feet can be represented by either 3 small knots or one big knot. The reason I do it this particular way is to keep that pattern that roughly follows the number of feet in hundreds. Fatigue and impaired thinking are nothing to mess around with, and it helps to have systems that work easily even when thinking has gone fuzzy.

I had never drawn this arrangement out on paper until pondering trying to explain it for my friend Janine, who is starting in on her new-to-her sailboat. But now I’m happy to have the printed key. I think I’m going to laminate a copy and post it by the anchor lines on Great Auk. 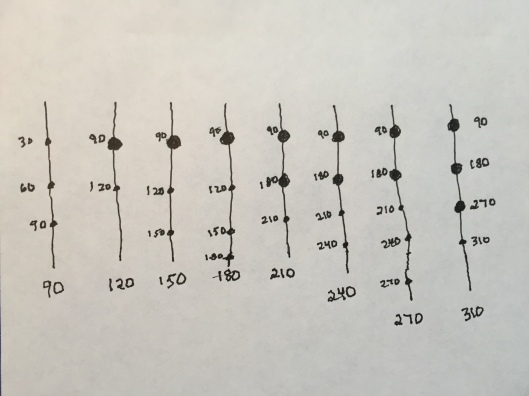 A couple of thoughts on scope:

Unlike the link that I posted above, almost everything one finds suggests that one should generally use a minimum of 7:1 scope for anchoring. But then you go out and anchor where there are other boats, and find that people look at you like you’re a crazy person, if they ask how much line you have out and you tell them the amount that correlates to 7:1. They are also affronted, because it means there’s not really enough space for them, when everybody swings around. People I’ve talked with who anchor routinely in very deep water use a lot less – sometimes as little as 2:1 or 3:1. That seems iffy to me, but things probably work differently when anchoring in something like 60 or 100 feet. And some folks in regular anchorages use those small amounts. Though dragging in regular anchorages is more common than it ought to be.

Further, it really matters what kind of anchor you use, when calculating needed scope, and this does not seem widely addressed. Danforth style anchors really do need 7:1 to bite in properly. At the other end of the spectrum, fisherman anchors, also called yachtsman – the kind that people put in tattoos – do fine with quite a bit less. And other anchor styles seem to fall somewhere in the middle. There is a really nice video about this, at the video subscription publication Off Center Harbor. I believe that you can see an abridged version of the video without subscribing:

Anchoring a Boat, Part 2 — Reliability & Versatility of a Danforth vs. a Yachtsman Anchor

So those are some additional thoughts, when it comes to working out how much rode one should put over in the first place.

pulchritudinous [ puhl-kri-tood-n-uh s, –tyood– ] adjective physically beautiful; comely. https://www.dictionary.com/browse/pulchritudinous Years ago, in writing back and forth with Dave Zeiger …

The day after that last post, the boat went in the water again for another quick dip. We were planning …

The Next Boat has come a long way since the last writing. There has been test launching, and work on …

In addition to Race to Alaska prep, this past winter and spring also included work on a boatbuilding project. When …

[Photo: Kent Mullikin] [This post was mostly written about three years ago, but did not make it onto the blog …

[Photo: Shemaya Laurel] Well, the sad report is that as our go/no go decision date of May 1st approached, I …

This lovely drawing says it all. Thanks to Dave McDermott, who drew the picture, and to Chris Shelton, whose white …

Sorting out the chart question for the Race to Alaska has been an ongoing process. The choices range from stacks …