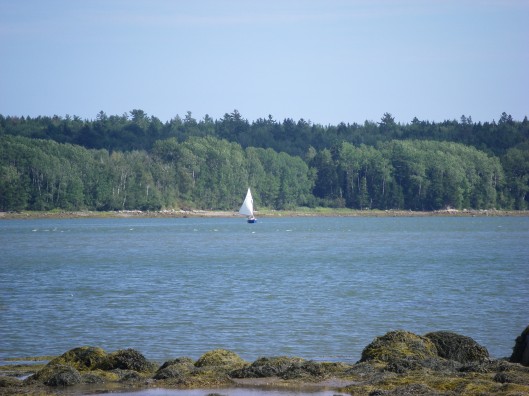 Earlier this summer the motor finally came off the boat. “Motorless in training” was a long-term process, involving gradually less and less use of one or another small electric motor, on one or another of the various boats. With the launch of the Peep Hen this summer, the motor was tried for the short trip from the boat ramp to our float. However, the wind was strong, and clumps of rockweed found their way into the propeller in fairly short order, completely stopping progress, and leaving the boat vulnerable to being blown into the shore. In the end it was more effective to anchor, shut off the motor, and finish rigging the sail, in order to go the rest of the mile or so across the Bay. As it worked out, that was the last time that the motor was turned on. After sailing around and about in Joy Bay and Gouldsboro Bay, and then a month of sailing to Penobscot Bay and back, all without further use of the motor, it seemed doable to simply take it off the boat.

What a relief that was, coming home and putting the motor on the dock! No more snagging lines, and the boat sailed better, without that 30 pounds perched right on the transom. Even better, nobody expects you to use your motor if you don’t have one. A real transition came, in the “motorless in training” process, when I found myself using the motor only because I felt like other people might be aggravated if I didn’t.

This was in contrast to many previous rounds of cranking up the electric propulsion, when I would use the motor because it would get me out of a situation that was less than ideal. With each time that happened, there was an opportunity to think through how to avoid that series of events in the future, and gradually those motor uses became less and less frequent. There was left only convenience, and usually somebody else’s.

As this came about, I realized two things: The “graduate level” of motorless in training is how to sail motorless without inconveniencing other people. And the point where the only reason for running the motor is convenience means that one has made some headway in learning to manage the boat by relying on sails, current, and human propulsion of one sort or another. With those thoughts in mind, it felt reasonable to take the leap.

Not that this wasn’t a little bit nerve-racking! There’s comfort in having a motor available for just in case, even if you never use it. But it was also fascinating.

A couple of weeks after getting home from that first long trip, and then taking the motor off the boat, there was a good weather opportunity for making a trip back to Penobscot Bay. East wind is a special thing in this area in the summer, and it was forecast to go on for days. In that previous trip I never did get to Belfast, in the northwest corner of Penobscot Bay, and I was sad to have missed visiting there. That east wind was an opportunity to jump on the metaphorical bus. Three days later I was at Holbrook Island, and the day after that made the relatively short hop across to Belfast. Just as fast, the wind went the other way, and after a number of lovely visits, folded like origami into a very short time, it was back toward home.

The return trip happened in record time, thanks to an ideal wind, combined with the turning of the various tides coming at just the right moments to make it all possible. Eight days after leaving home, I was back at the float in Joy Bay. All of this with no motor, even as decoration.

What I learned while covering all that territory was that taking the motor off the boat actually made me a more careful sailor. I had already tended toward caution, and I had already thought that having a motor on the boat was a bit of a false security – motors that don’t start, or quit when one was hoping they wouldn’t, are after all a fact of mechanical life. Boat motors that quit when they shouldn’t have caused all manner of problems, probably since they were first invented, and some of those problems have involved very sad endings. Still, and even knowing that, sailing with the motor clamped onto the boat does make one think that one can try things, on the theory that if that slightly uncautious idea doesn’t work out you can always turn on the motor to (figuratively) bail yourself out.

For example, there is the combination of current and dying wind, or traffic and dying wind, or rocks, and waves, and you guessed it, dying wind… Take the motor off the boat, and each one of those possible events should rightfully make your stomach skip, and inspire decisions that will keep yourself and the boat out of harms way, including if the wind quits. Really, it’s not a bad idea to sail in that way even if you do have a motor, but if the motor works almost all the time it can be easy to bet the house on it, becoming a certain kind of complacent.

On AUKLET there is the yuloh (Chinese sculling oar), and on the Peep Hen, SERENITY, one can scull fairly effectively with the rudder, pushing the tiller back and forth repeatedly, to drive the boat forward. Both approaches are very useful when the wind dies, but there is a limit to how much current they can overcome. It’s important to think ahead, starting to scull away – or across the current – from a hazard well before it is close enough to be actual trouble. If there is a motor on the boat, one might wait, thinking something along the lines of “well, if this maneuver doesn’t work I’ll just turn on the motor, which has plenty of power to do the job.” Take the motor off the boat, and that kind of procrastination looks a lot less appealing!

All in all, sailing motorless is incredibly engaging. I hope to be able to do it well. There has now been another trip, of about a week, in and out of various bays and harbors over toward Jonesport, some ways east of here. It’s amazing how much ground you can cover, with a small boat and a bit of sail. I never really believe it’s possible – it’s as if all the time that the motor was sitting there on the stern, doing absolutely nothing, it was actually involved in propelling the boat. Sailing without it, covering 50 or 100 miles or much, much more, feels like perfect magic, in the literal sense. On a puff of wind, that you can’t even see! Extraordinary.

10 thoughts on “Motorless at Last”