Summer sailing, besides being beautiful and warm, is full of bugs… I have never been more bug-bitten than I have on a boat with ineffective insect strategies. As a result, a lot of thought, and some preparation, have gone into avoiding further repetitions of those experiences. Being averse to chemicals, this mostly involves netting, in a variety of applications.

Where I’ve been sailing, the primary insect issues are mosquitoes, and “no-see-ums,” those tiny black midges that are especially thick in the vicinity of wetlands and marsh grasses. “Black flies,” or gnats, have not been a big problem the way they are in the woods, at least so far in my experience. Since they breed in moving fresh water, I guess this is not such a surprise. Then there are biting flies, including horseflies and deer flies, and smaller ones that look like houseflies but are determined biters, that I have only encountered on the water, and can be quite a pest. I’ve taken to keeping a flyswatter on the boat, which handles them nicely; netting hung loosely over the companionway also keeps most of them out.

Bug netting comes in a couple of varieties. Some has a more open weave, and will stop mosquitoes, but nothing else, and is sold as “mosquito netting.” The other kind has a tighter weave and will keep out both no-see-ums and gnats/blackflies, with the trade-off that air does not move through it as easily, which is noticeable on a hot summer night. Either kind is often available by the yard, in 6 foot widths, generally from camping supply places. I get no-see-um proof netting from Campmor (nope, not receiving anything for this reference): https://www.campmor.com/c/72-in-tight-weave-no-see-um-mosquito-netting-61001

The first year that we launched AUKLET involved a tremendous amount of completing rigging, as well as finishing other aspects of the boat, after the boat went into the water in the spring. This was in the Connecticut River, and nearby on the north shore of Long Island sound. There were a lot of no-see-ums! Having gone through a terrible time with bugs in the trips in the Peep Hen, AUKLET was prepared with a giant, 12′ x 12′, piece of no-see-um proof netting that Suzanne and Theo and I had sewn together, with loops for attaching the netting to line strung over the cockpit. We had also made a screen for the forward window using this same material, and had an arrangement for attaching another piece of no-see-um netting over the companionway (more on that later).

Nowadays I mostly use the forward window screen and the companionway netting. When there are too many bugs in the cockpit, lately I’m inclined to just go inside the cabin. Sometimes I have waited too long, enjoying a pretty evening sitting outside, before sealing off the companionway netting. This has resulted in mosquitoes in the cabin, with nighttime coming on enough that you cannot see them properly to catch them. Oh no!

This year when that happened it occurred to me that I already had the perfect solution on board. Out came the giant cockpit netting, and up it went over my berth, neatly tucked, especially around the head and sides.

I could then hear the mosquitoes in the cabin, but somehow knowing that they were not about to be biting me made the sound completely unproblematic. Several times this summer I have slept with this indoor tent. Sometimes the weather has been cool, and it’s been a pleasant surprise to find that it is significantly warmer underneath the indoor tent. Sailing north, excessive heat has not been such a problem.

Early this summer, on an evening when the companionway was carefully closed off well before mosquito-time, as it started to get dark there were still new mosquitoes. Out came the berth netting, but the situation was a puzzle. First I thought that I had not quite perfectly taken care of the companionway. When it happened a second time, the next morning with full light I carefully checked the companionway and found not a single spot where a mosquito could wriggle through. Thinking on this, it finally occurred to me that there are plenty of mosquito-sized openings between the starboard cockpit locker and the cabin, and noticeable cracks where the anchor chain goes through the chainpipe and its cover.

The chainpipe allows the anchor chain and line to be dropped down through the deck into a bin in the starboard cockpit locker. Blocking that gap with a rag has made all the difference in nighttime peace.

Different boats have a variety of strategies for putting companionway netting in place. Some use frames with netting, instead of the ordinary drop boards for closing the companionway completely, with the netting frames sliding into the same slots. Others folks use netting with Velcro on the edges. The frames seemed like too much trouble, especially for quick exits in a serious situation, and my experience with Velcro and netting is that the Velcro grabs the netting when it shouldn’t, and worse, opens up gaps in the weave when you pull it apart. But there were those handy slots, for drop boards that were not in place. It turns out that you can hang netting on a string fastened inside, across the top of the companionway hatch, put a flexible weight, in this case a coil of spare line, over the extra material at the bottom of the netting to pin it down, and then fill the slots on the side with pieces of foam “backer rod” to pinch the netting into the slots.

Backer rod comes from hardware stores, in a variety of diameters. It is made of soft foam, and is ordinarily used for filling gaps that are going to be caulked, so that you don’t need so much actual caulk for the job. It’s cheap, flexible, and easy to work with. With a bit of netting bunched up on the sides, and a little experimenting to find the perfect diameter of backer rod, it makes a very handy closure for the netting. It’s not much trouble to put in, and comes out instantly for quick exits. 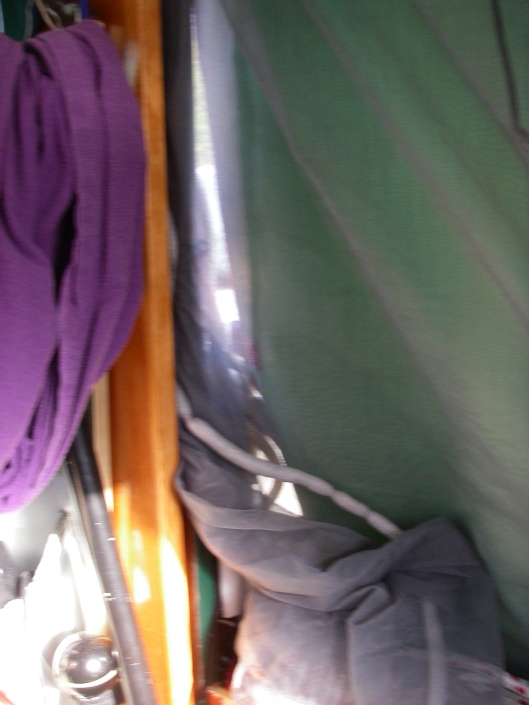 On this boat, the top 6 inches of the vertical sides of the companionway have no slot. This was initially a problem, but Suzanne took a trip to the local department store and found oversized plastic clips that close onto the existing strip of wood. Voilà, a complete netting seal all the way around the perimeter of the companionway.

This whole routine might be too fussy for some folks, but it has seemed worth describing, in case some part of it is the perfect fit for somebody puzzling over this issue. I’ve found it easier than the alternatives, having tried several over time.

The forward window screen is a plastic frame that Theo made from scraps that had to do with the borders for plastic lattices, like those used to close off crawlspaces underneath porches and houses. Foam weatherstripping is attached around the outside edge, and makes a snug fit into the frame of the window, where it stays without any additional attachment.

The screen presses into place, and there is an eye strap screwed onto the inside face (hidden behind the rolled up curtain in the photo), to make a handle so it’s possible to get it back out of the window. It uses regular fabric no-see-um netting. I was worried about that being too fragile, especially when the screen is out of the window, being stored somewhere inside the boat. But it turns out that with moderate care it’s been fine, and the original netting is still holding up in this fourth year of sailing.

Then there is the question of mosquitoes while actually sailing. I’ve been pretty bitten in this situation also, especially coming late into a harbor, just as it gets dark. Footwear is good, as are pants and long sleeves, but sometimes this really isn’t enough. Last winter, browsing a stray catalog that showed up in the mail, I came across the perfect thing: a bug shirt! Marketed to people who go canoeing in the Boundary Waters of Minnesota – where they really know mosquitoes – it has netting for coolness along the sides, and a full hood with a netting front and zipper access, to cover one’s head and face. You wear a brimmed hat inside the hood, to hold the netting away from your face and neck (so the bugs can’t bite right through the netting), and gloves for your hands, and laugh at the mosquitoes.

One morning about a month ago I left a Gouldsboro Bay anchorage early, when it was still dark enough to need navigation lights. There was barely a breeze, and the mosquitoes knew it. The shirt was a fine thing – easier to manage than a mosquito headnet, with no worries about gaps at the collar. I’m an absolute convert. This is the one I got, but the same company has another one, and I’m sure there are others to be found elsewhere. As always, I’m not receiving anything for including this link… http://www.boundarywaterscatalog.com/all-products/browse/keyword/bug-shirt

So that’s about it for what I’ve learned about bug avoidance. I do like early spring and late fall sailing, for that time with no bugs, no netting, and neither bug-vigilance, nor itching. But since working out the various systems, that middle time of the sailing year has also been quite nice.

[Posted now in October, but mostly written sometime in August.]

2 thoughts on “Dealing with Insects”