Almost every project going on here makes a run through the paint shop. Or several, depending on how many parts a particular project is made up of. Suzanne gets all credit for every bit of painting, and today we got a photo of many completed items. It’s a handy opportunity to show what’s been going on around here. First, a picture from some time ago, while things were in progress: 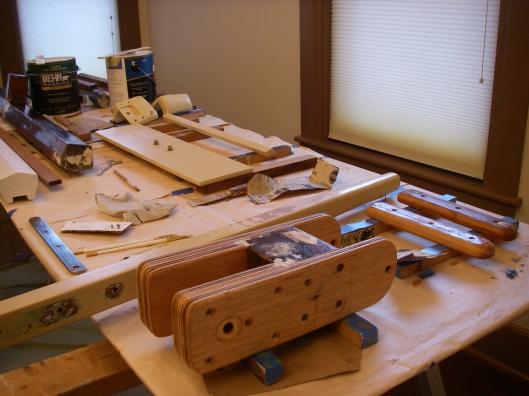 Various parts are laid out on the workshop table. Some are obvious, like the tiller, showing it’s heavily scraped area where it rubs on the movable slide board in the cockpit. The chunky thing in front is cargo boom jaws, explained more in a moment. Other odds and ends have to do with the rudder stock repair, and resulting changes in the stock/tiller connection. There is also a short drop board, which has two jobs: holding the bracket for the gimbaled propane cookstove, and new this year, having a proper gasketed lip to make a little barricade for unruly bits of water sloshing toward the interior of the cabin, while underway with no big drop boards in place. At the back left, those are not boat parts – pieces of the house have been patiently waiting their turn.

The completed paint collection includes the new version of beaching legs, for another try this year. These boards have multiple uses, besides holding the boat up when the tide goes out: they will be lee boards for secure sleeping in the starboard berth, and the two pieces will also go together as one, with velcro straps or lashings, and fit into the cargo boom jaws, as the cargo boom. The cargo boom jaws rest against the mizzen mast, on top of the partners (with a parrel line around the back of the mast). The cargo boom is attached to the jaws by that heavy pin on the left, and a block and tackle goes on the upper end of the boom. The cargo boom is supported at the upper end by a spare mizzen halyard, and together the whole business can be used for lifting heavy stuff like spare anchors from cockpit lockers. This is experimental, but I’m hopeful…

The tiller is finished, and Suzanne and I had some fun setting up a piece of leather and lacing it on, to protect where the underside of the tiller was getting scraped. Leather for this kind of project, which was originally a little bit hard to find, came from The Wooden Boat Store, where it is sold primarily for oar leathers. Off and on they have “scraps” available, at a much more manageable price. We did a similar leather project on the yard last year, where the yard had been getting worn against the mast, and it worked out well.

The odd shaped thing at the left of the completed paint photo is the rudder stock “clamp,” which will reinforce where the wooden stock (now repaired) had deteriorated badly from strain with the tiller connection. Now, instead of a large bronze pin through plain wood, there’s a completely different arrangement. Because of the rudder stock “clamp,” the tiller connection has needed to change, and will have bronze straps (one shows in the first photo), and the pair of wood spacers that show in both paint shop photos. The end result will be overbuilt, but sturdy! And removable, for dropping the rudder in the future. When this all goes together, after the rudder goes back on the boat, there will be a blog post devoted to the subject. But if anybody is curious now, there’s a series of photos that can be seen here: http://smu.gs/1hn0kDE

Also new, and somewhat experimental, is the belaying pin collar for the mizzen mast (shown below), to provide places to tie off the numerous junk rig and other mizzen lines.

There used to be a big plastic cleat on the mast, held with two screws, which has now been taken off. I’ve been averse to putting more screw holes in the mast, so the collar is going on with wedges, and is braced by that little stop block that uses the old screw holes from the cleat. Seizing will be going around the wedges, to keep them from going anywhere… It all feels pretty firm now, but we’ll see what happens in use. Belaying pins made from dowel, with little tubing stop-collars, will go in those holes. They too are just out of the paint shop, and are shown in the earlier photo.

With all this going on, I guess it’s obvious why the boat has not made it to the water yet! But on the other hand, I’m having a really nice time being home for a bit of summer. It’s satisfying to work on this stuff, even if a little alarming to have so many experimental bits running at once. It should make for an interesting month, as the parts get to actually go together.

2 thoughts on “News from the Paint Shop”