The day after that last post, the boat went in the water again for another quick dip. We were planning to leave it in the water after its test, tied to the West Cove Boatyard pier for a week or two, but the weather forecast was going downhill. With 20 to 25 knot wind forecast out of the north – for three days – it did not seem like such a good idea. The worst of the wind was forecast for the holiday when nobody would be around to even check on things. It’s a well protected cove, but north wind is exactly the worst direction, so together the decision was made to get the boat back onto land that same day. But we sure did have fun! 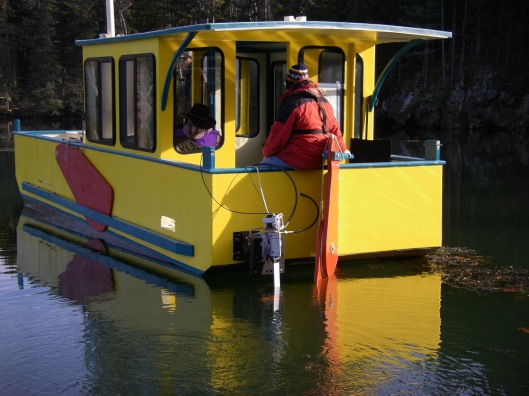 The mast went up, the motor went down, and Christopher (West Cove Boatyard owner, and engineer), Kyle (who has done a lot of the recent building on the boat), and I set out for the slightly more open water to find a breeze. We didn’t plan to sail – no rigging yet – but wanted to see how the motor would perform now that it’s deeper in the water, and with the boat working against the wind. 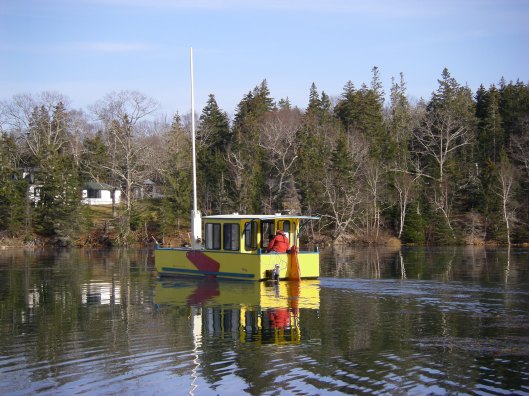 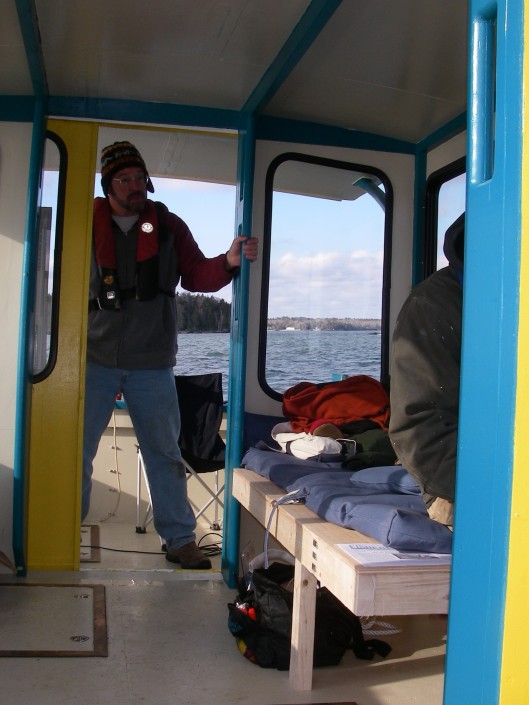 I’m very happy to say that this sea trial was quite successful. Besides being lower in the water, the motor now has a cable turning system, so its angle can be adjusted from inside the cockpit. That’s really helpful for counteracting the motor being located so far off to the side of the transom. Interestingly, the ideal orientation of the motor changes quite a bit depending on the orientation of the boat to the wind. I suppose one could have predicted that – either way, it made the fussy engineering for the motor-turning arrangement feel quite worthwhile.

The other good news is that we were able to maintain full control of the boat even after we got out into a little bit of breeze. Moderately increasing the throttle took care of steering problems in the wind; with the motor so much deeper in the water than it was during our first test, we made plenty of headway – about 2.5 knots, without strain – so the rudder had a good grip. This was quite a change from the previous outing, when in a virtually identical breeze – approaching 10 knots, with a little bit of waves coming the long way up Frenchman Bay – we had to turn back because we couldn’t make enough headway through the water, and steering was not reliable against the wind and waves. Having repositioned the motor bracket so the propeller is further below the surface has made all the difference. 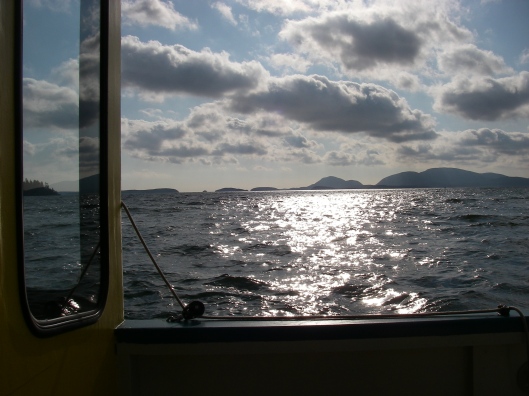 It did become clear during this trial that setting the boat up with two motors would make a lot more sense than the current arrangement. It has been suggested that an alternative would be to put the motor in the middle of the transom, and have two rudders instead, on either side. This approach would also address the motor offset issues.

However, the present rudder mounting has been quite a project. More on that in another post, but it has lacing instead of gudgeons and pintles, and we’ve gone through quite a process to get this something like right. It would be easier the second time, but you just hate to tear something off and redo what has been such a job. Besides that, two motors will help a lot with tight maneuvering in a crosswind or current, and motor redundancy is a nice thing, especially with a boat that, with all those broad surfaces above the water, is not going to be the most agile creature under sail.

The other Torqeedo issue is the problem of picking up weed on the propeller, and we got a good test of that also. The cove from which we set out has quite a bit of floating, unattached rockweed, and we did indeed have complications with propeller tangles. More tools were in order for dealing with this, and fortunately the boatyard has a barge on a mooring a little further out from shore. Rather than going back to the dock – and having to get in and back out through the weedy section again – Christopher suggested we could go to the barge, and there find a boat hook, a suitable knife, and some tape. Naturally, once we had gotten those things and Christopher had assembled them, we did not pick up another clump of weed for the entire rest of the outing. 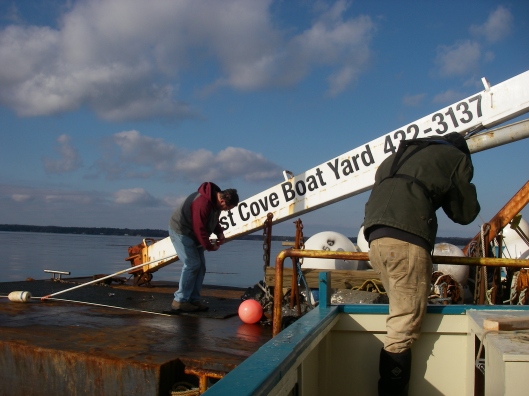 I really loved the way GREAT AUK’s square bow could go right up to the side of the work barge.

Those first two times of picking up rockweed clumps on our way out had meant that we had to stop entirely, raise the motor, and scramble to reach the propeller. Once the propeller picks up a significant clump of weed the motor is pretty much ineffective, so there’s no ignoring it. There was some hope that with the motor deeper in the water, and the rockweed floating, that the propeller would miraculously pass beneath without picking it up. Sadly this does not seem to be the case. On AUKLET, with its smaller Torqeedo clamped right onto the transom, clearing weed isn’t so hard. This new situation is going to require a different approach.

Fortunately, just in the last few weeks I was reminded again about folks who deal with stray lines in their sailboat propellers by having a serrated knife taped onto something like a broomstick – pretty much like what Christopher also thought to put together. They keep that tool always assembled, so it is handy when needed. With all of this fresh in mind, I am thinking it’s exactly the way to go for this Torqeedo weed issue. Then the inevitable tangles can be cut away maybe even without raising the motor, which would save a lot of effort. (It does make the case for sailing everywhere, which completely bypasses this problem.)

On this trip we also happened to have a nice push broom on board. Kyle stationed himself at the bow, broom in hand, as we went back into the cove that had so much weed. Between steering to miss the big clumps, and Kyle’s efforts, we got back to the dock without further problems. It was a lot of fun seeing that trick with the broom work – kind of like curling! 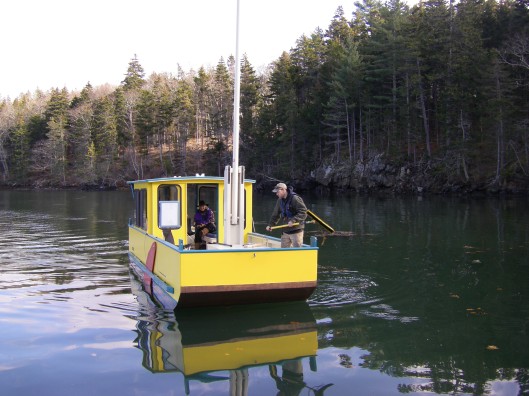 The other system we were testing with this trip had to do with the rudder. This rudder is “balanced,” meaning part of its area is forward of the axis of rotation for the rudder. When done just right, this balanced design takes strain off of the steering, so the person at the tiller or the wheel doesn’t have to work so hard. The crucial question is how much balance is enough, without being too much and causing other problems.

When we did the first test launch, it was quite striking how heavy the steering was. In discussing this with Dave Zeiger, the designer of Triloboats, I learned more about balance, and a simple approach to adjust the shape of the lower rudder so it can swing further forward. A small change in that pivot angle moves a significant amount of rudder area forward of the vertical hinge that the rudder turns on. The question is how much of the lower rudder hook to remove, keeping in mind that it’s better to take too little than too much. It’s so much easier to take away more later, than to put any of it back! 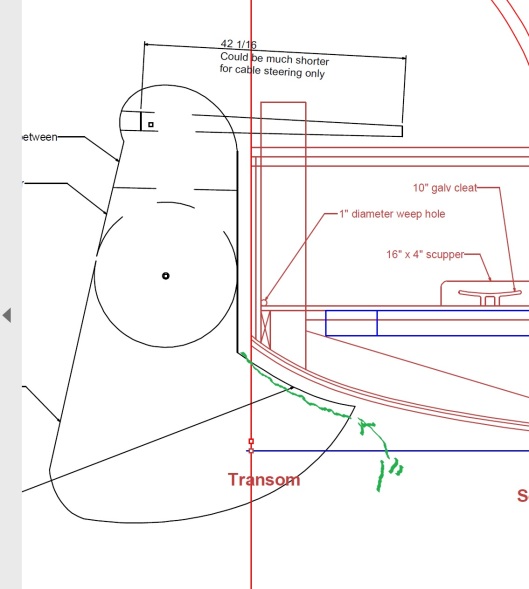 With all this in mind, in the intervening time between the first launch and this one, a 1 inch sliver was taken off the curve of the lower rudder. Epoxy was applied, to keep everything sealed, and we gave it a try.

I think that the steering is now a little easier than it was, but it’s still pretty heavy. So another sliver will be coming off, and it will be interesting to see how we do. Along with this rudder shape adjustment, the boat is also going to be getting wheel steering. The engineering for that is providing some puzzles, but we are working on it. In the meantime, we have the tiller, and we are gradually making progress toward really workable steering.

GREAT AUK is now snug on land, and everybody has gone off for the Thanksgiving holiday (and to watch the wind blow). We have made some headway on crucial information, and got to have loads of fun while we were at it. It was a real treat to be out on the water on November 26th – this is incredibly late in the season for recreational boats in downeast Maine. The day was warmish, in the 40s Fahrenheit, and with the sun, and that nice cabin, it was quite delightful. The possibilities are really opening up. 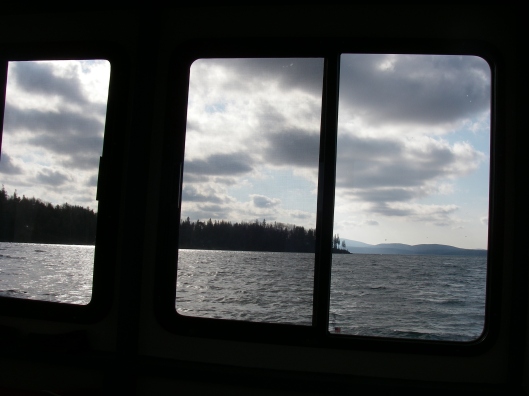 GREAT AUK is a variation on the SHANTY T24x8 Triloboat design, by Dave Zeiger. For more information on Dave’s designs, see http://www.Triloboats.com
(Patsy, there you go!)